After qualifying for Boston 2018, my coach and son, Miles Fowler, and I discussed my plans and goals for the sixteen month gap between my December 2016 race at Kiawah Island, SC and the April 2018 Boston Marathon.

There was definitely time to work in another marathon, but I had just come off nine months of seriously intense training. I opted for recovery, strength building, and perhaps trying to improve my 5K time. I had PR’ed in every distance in 2016, not bad for a 48 year-old, but missing out on a sub-twenty 5K by four seconds in May 2016 still bugged me. Just one of many flaws, I suppose.

Overall, 2017 was a lighter year on the race schedule. I kept training, of course, but the few events I entered showed a step back in speed, especially my unsatisfying 20:59 in May’s Jailbreak 5K. I blamed it on my new job. For motivation toward year’s end, Coach Miles and I decided to gear up for a PR attempt at the Lexington Half in November 2017.

Half marathon training was going well until a few weeks before the race. I was working on that build strength goal, performing an exercise called single leg dead lifts. This is where you hold two dumbbells and bend at the waist, lowering the dumbbells toward  one foot while the opposite leg raises out behind.  On one of the repetitions, as I raised my left leg behind me and lowered the dumbbells toward my right foot, I felt a pop in my upper right hamstring. It felt as if someone had plucked the muscle like it was an upright bass string. The pain caught me off guard, and I almost fell in the floor.

That can’t be good I thought. A few minutes later, when the initial pain subsided, I headed over to a treadmill to see if I could still run. Surprisingly, I could still run at a comfortable pace without pain. I took it easy until the Lexington Half, where I had a solid run of 1:37:34 with no hamstring pain, but was a far cry from 2016’s PR of 1:35:06. Still, I was at a good fitness level and still looking forward to a solid Boston.

Well, mid-November is too early to start official training for an April Marathon, so I set my sites on another 5K. I really wanted to beat that twenty minute mark. Coach Miles was planning on doing the Charleston Half Marathon in January, and I decided to join him in there for the Shrimp & Grits 5K race that goes along with the Charleston Marathon weekend.

Training was going well, and the hamstring was not causing any problems. Then, a week before the 5K, I was doing speed work (400 meter repeats) on a 36 degree afternoon. Apparently, I wasn’t warmed up enough, and the hamstring twinged on me again. I was not able to complete my 400’s at the targeted speed, but running slow still was OK. I took it easy that week, and managed a disappointing 21:18 in Charleston, where I didn’t push it in the windy 39 degree weather.

With the Shrimp & Grits 5K behind me, Coach Miles and I started “official” Boston Marathon training. The stretch goal was a fitness level capable of a 3:20 marathon, but an “easy” 3:30 (my qualifying target) would be acceptable on race day, depending on what curves were thrown at us. Given my Lexington Half time and Shrimp & Grits 5K times, the 3:30 definitely seemed doable.

I wanted to re-qualify, even if Boston 2019 was probably a not a possibility from a priority perspective. I’d received conflicting reports on re-qualifying for Boston at Boston, from two very good runners former Boston participants. One said it was hard to do and I should just enjoy a celebration run, while the other said re-qualifying was very doable. Decisions decisions.

“The hay is in the barn”

Unless you’re a marathon runner, you’ve likely not heard this phrase. I had not until a running veteran said this to me once upon a time as we discussed an upcoming marathon. It is a reference to doing the hard work of baling hay fields and taking it to the barn to have food for the animals over the winter.

For a runner, it means that if you’ve done the proper preparation, then while you taper off your training the last two or three weeks before a race, you will be OK for the race duration.  Your hay, or fuel earned through training, will be there for you to consume during the race.

Did you catch where I wrote “strike two” back in Part One of this memoir when writing about the weather conditions?  Did you think it was a typo? It wasn’t. So what about strike one?

Take a look at this chart: 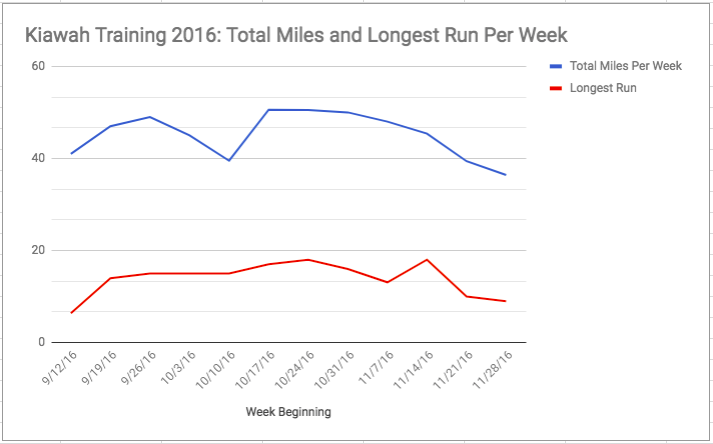 The blue line shows my weekly run mileage for the three months before Kiawah 2016, while the red line shows my longest run distance of that week. That’s some solid running there – 45 miles per week average and seven runs longer than 15 miles during the training.Now take a look at this chart: 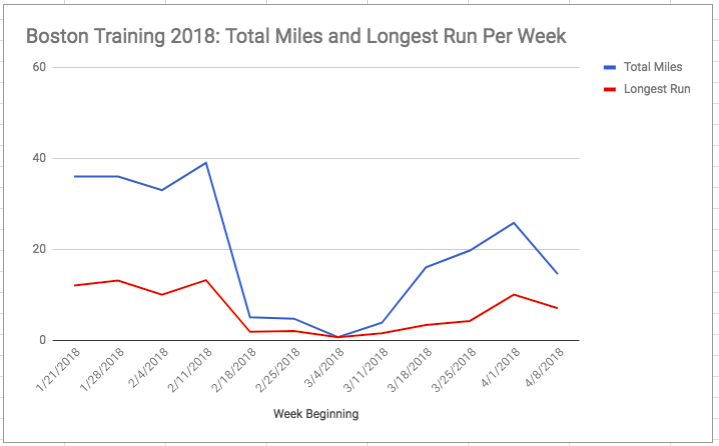 It is the same chart for the three months leading up to Boston. Do you see a problem? Mid-January to mid-February was a solid beginning. I was starting to feel confident and have really solid long runs. My 1968 model GF Hay Baler was really starting to harvest some serious hay. But then…

Boston, We Have A Problem

On Sunday, February 18, a day after my longest run so far in Boston training, 13 miles, the run plan was mile repeats. Coach Miles and I believe Sunday mile repeats after Saturday long runs were the secret sauce to my Kiawah success, and we planned to keep doing them.

I warmed up for 30 minutes on the bicycle trainer and then did an easy mile with some striders (kinda like sprints) to prepare my body for the planned four repeats. The weather was warm for February – 70 degrees. I felt good, perhaps too good, as I launched into the first mile. I probably started too fast and made it about 200 yards when my right hamstring sent a shock through my leg, stopping me in my tracks. I tried to restart and ran about another 200 yards, but every step was painful and my pace was extremely slow. The 1968 GF Hay Baler had a blown its transmission.

I quit for the day and spent a couple of days recuperating on the bicycle. Run attempts later in the week showed no improvement. Seven weeks to Boston and I literally could not run.

There’s your strike one.

By the way, Boston has a no deferral policy. If you’re injured and cannot go, that’s just too bad.

Any thoughts of re-qualifying for Boston at Boston were now lunacy. Just figuring out how to run pain-free again was the priority, along with how to keep marathon fitness without running. Fortunately, I have a coach who also knows a bit about cycling. Workouts now became almost 100% cycling, with some elliptical thrown in. I logged about 500 miles on the bicycle trainer during last seven weeks. I also found a local chiropractor who practiced Active Release Therapy to work on the hamstring/glute/hip area a couple times per week.

The ability to run slow and pain free finally returned in early April. Just eight days before the marathon, I was able to do double digits again – a mere 10 miles at a 10:15 per mile pace. Certainly nothing to write home about. The weekly average for those twelve weeks leading up to Boston was less than twenty miles and my longest run was only 13 miles.

As I boarded the plane to Boston, I wondered if it was enough. I hoped that somehow the previous nine years of training had stored up some hay in a mystery reserve barn somewhere deep inside.