The Boston Marathon. The oldest annual marathon in the world and arguably the most prestigious (does anyone really argue this?). Twenty-six point two miles starting in Hopkinton, Massachusetts, and ending on Boylston Street in downtown Boston. Along the way, 25,000+ runners pass through the towns of Ashland, Framingham, Natick, Wellesley and Newton. The race is held each year on the third Monday in April – Patriots Day in Massachusetts.

The first getting to Boston is qualifying. There are tough qualifying standards. 2014 Boston winner Meb Keflezighi once said “If you are a marathon runner, you are measured based on the Boston Marathon.”*

Trying to qualify can become quite the obsession for some (not me, of course) and may take years of trying. I started officially trying in 2012, and took four years, several failed attempts, and a coaching change to do it. If you’re interested in my write up about my qualifying run, you can find it here: Finish What You Started.

The second getting to Boston is figuring out the travel logistics around traveling to Boston. A seasoned traveler, I am not. Being in South Carolina, driving is doable, if you have extra time to make a couple days trip of it. We chose to fly on the Saturday before the race. My carry on bag held all my running gear, including multiple clothing choices and layers to handle anything mother nature might throw at us – or so I thought.

I also made sure my official Runner Passport from the Boston Athletic Association was in my possession at all times. It had been in the fireproof lock box at the house since receiving it a few months back. This was my official ticket to run and had to be presented in person at the packet pickup/expo to receive my race bib. I could replace all gear easily at the expo, if lost, but that passport was not replaceable.

We had no travel problems and arrived at our downtown Boston hotel at 5:30 p.m. We had chosen to stay a few blocks from the finish line to make race day logistics easier on the support team. Upon arriving in the lobby of the Park Plaza Hotel, which was bustling with runners and quite different from the Holiday Inn Express,  my daughter remarked with wide eyes “Where are we?” “Definitely not in Kansas, Sweetheart.” It was country come to town.

The third getting to Boston is actually finding your way to the start line on race day. Boston is a point-to-point race, starting 26.2 miles west of the finish line. Fortunately, the race provides free bus service from Boston to Hopkinton, but which creates a couple of potential challenges. First, you still have to make your way to the bus loading area early on race day. Second, once the bus makes the approximate one hour trip, you’re dumped in the Athletes Village to wait, potentially braving the elements for a couple of hours before your wave start.

My friend and main Boston advisor, Scott, told me about a private charter bus (Fit 4 Adventure) which provided shuttle service to Hopkinton. The cost was only $30 for a ride on a heated bus with a bathroom. The shuttle also left from our hotel at a reasonable hour, and you could stay on the parked bus as long as you wanted. Sold.

And there I was, my first race as a 50 year-old, finally standing in Hopkinton at the start of the 2018 Boston Marathon. Despite taking up running at age forty, I’d beaten the odds and qualified for Boston. I’d also successfully navigated travel, packet pickup, and the bus ride to the start. Ain’t it great when things are going your way.

I won’t lie, though. My confidence was low. I probably hadn’t been this unsure of how a marathon might go since marathon #1 back in 2009. The weather wasn’t helping in the least. Just a few days prior, I had been in sunny South Carolina with temperatures in the 80’s. Now, here in Massachusetts, the air was 37 degrees with heavy rains falling in frequent bands. If that wasn’t miserable enough, there was the bonus wind-  20+ mph out of the east, which meant we’d be running into the wind the entire race. I’d done training over the years in cold, rain, and wind but nothing like this. Strike two.

My start time was scheduled for 10:25 a.m. – Wave Two and corral five. Thanks to the logistics of herding thousands of people to the start, I’d been in weather better suited for an episode of Deadliest Catch for almost an hour by the time 10:25 rolled around. The three quarters of a mile walk to the start from the Athletes Village would have to serve as the warm up. I threw in a few lunges and leg swings for good measure before the corral filled. 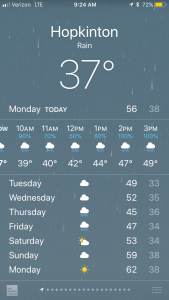 Right on time, Wave Two started. Those of us in corral five started creeping toward the start line. I briefly considered trying to run  in the poncho I’d been using in my last hour’s attempt to stay dry. Nope, I decided, and tossed the poncho into the growing pile of throw-away clothing being discarded along the side of the corral.

I pressed the play button on my wireless headphones, and the beginning organ notes from Boston’s “Foreplay/Longtime” filled my ears.  Crossing the start line timing mat, I pressed the start button on my watch. It was FINALLY time to run the 2018 Boston marathon. So, I hoped.

It’s been such a long time
I think I should be goin’, yeah
And time doesn’t wait for me, it keeps on rollin’
Sail on, on a distant highway
I’ve got to keep on chasin’ a dream, yeah
I’ve gotta be on my way – “Foreplay/Longtime”, Boston

My BQ write up from 2016: Finish What You Started.